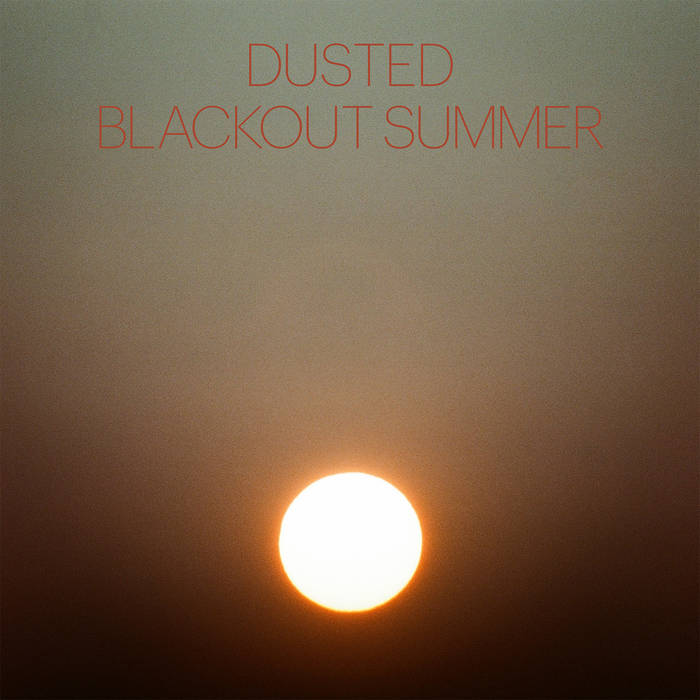 Weadee M. Dusted did an amazing job at capturing that hazy sound that can often get lost in studio records. It's such a calm album and really feels like summer.

As one of the founding members of the noisy electronic group Holy Fuck, Brian Borcherdt has spent years making unhinged dance music and touring relentlessly as the band’s envelope-pushing sound developed. Behind the scenes, however, Borcherdt was writing songs of his own that branched out in dramatically different directions than his main gig. At a low key hometown show during a holiday break, Dusted was born as an almost total antithesis to Holy Fuck’s bomb-dropping sound.

Standing alone with a guitar, and singing through a crackling guitar amp, Borcherdt’s solo songs were minimal, floating and wrapped in a soft but troubled haze. The room was held for a moment in that haze, a crowded chatty bar unexpectedly hushed by this strange ambience being shared for the first time. If Brian’s work in Holy Fuck represented a reckless night out, Dusted was the somber comedown the morning after.

Soon, a debut record, Total Dust, materialized and a live configuration of Dusted spent much of the next year on the road supporting Great Lake Swimmers, Perfume Genius and A Place To Bury Strangers. In addition to steady touring, Dusted also made a cameo on screen in Jean-Marc Vallée's 2014 film Wild.

All the while, Borcherdt was constantly writing new material and working the new songs into the sets, ultimately ending up with an album’s worth of songs by the time tour was winding down.

Though the band was still buzzing with the energy of playing live every night, they opted for a different approach when it came time to record the new songs. Rather than the loose, live energy that gelled on Total Dust, this time Dusted entered a studio and built their songs on quantized rhythms, overzealous overdubs, digital plug-ins and an entirely more polished production style.

“Looking back, it was probably the stupidest idea possible!,” Borcherdt said of the sessions, laughing at how lifeless they came out for a band that had been killing the same songs in front of audiences weeks before. While technically precise, something in the flawless tracks felt sterile.

“We just couldn’t find that haze.” Borcherdt said. Ultimately the sessions were scrapped and the band started again from scratch. Over the next stretch of months, progress on the album moved in fits and starts. The project re-assembled as a full band with Anna Edwards on guitar, Loel Campbell on drums, and (occassionally) Anna Ruddick on bass. Songs were pieced together in various studios whenever breaks in Brian’s increasingly busy schedule with Holy Fuck allowed. As if that wasn't enough, he was also working on new sounds with Doug MacGregor of The Constantines and Alex Edkins of Metz in their band LIDS, making his already hyperactive musical world that much busier.
In spite of all the variables that went into making the album, Blackout Summer is an amazingly consistent and emotionally focused statement. Each song creates its own world of texture and narrative, and all nine of these worlds interlock with the same strange, hazy emotion.

Album opener “Seasons” sets the tone for the album’s twilight glow with a protracted, dreamy unraveling of chiming guitar lines and wistful vocals, all building in a slow burn. A far cry from the overproduced first drafts of the album, this final version captures the band playing live in a cramped makeshift basement studio in Toronto, bringing a necessary human touch to a song about restlessly watching love turn cold.

Blackout Summer winds through floating ambience and dark, moody rockers, but every disparate moment somehow feels connected. The vibe is warm and intimate, but always from a distance. There’s a sense of searching that drifts throughout but is never communicated overtly. Dusted’s fuzzy landscapes, dream-like production and buzzing melodies all congeal, burying Borcherdt’s twisted take on pop under layers of that all-important haze.

Bandcamp Daily  your guide to the world of Bandcamp